Narendra Modi’s Man vs Wild: Emphasize Ecology and Enhance Tourism―Share if You Care! 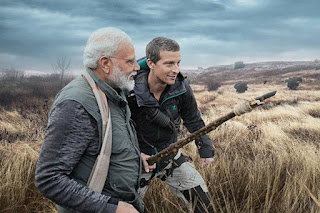 Presently I am authoring a book titled, Spiritual Tourism: Tourists First, Tour Operators Second, And Destinations Third. When I was looking for the content on promotion of tourism and adventure travel, India’s honorable Prime Minister, Mr. Narendra Modi’s inspiring epic adventure flashed in my mind. I viewed his Man vs Wild episode with Bear Grylls, a British adventurer, with great interest and included in my book.
Leadership Lessons from Narendra Modi
Narendra Modi maintained cool composure throughout his adventure travel. He demonstrated that adventure tourism is for brave-hearted, not fainthearted. There are several leadership lessons you can learn from him from this episode. Be courageous. Lead by example. Connect with common people. Inspire other leaders to lead from the front.
I was inspired by his humble origins and the struggles he underwent in his initial days. He never aspired to become the Prime Minister of India. His service and commitment to serve people and destiny made him India’s Prime Minister. He shared several unknown personal stories during his adventure travel. He unveiled that he had supported his father in the tea stall, sold tea in the railway platforms and left for the Himalayas in his younger days.
For Narendra Modi, leadership is all about service. He did not take a vacation for the last 18 years and it was the first time he took the vacation it was considered so. However, his epic adventure cannot be considered a vacation because it is another endeavor to send a message to the world about the importance of ecology. He took it as an opportunity to highlight India’s cultural richness and greatness by highlighting the principle of Sarve Jana Sukhino Bhavantu (let everyone be happy) and India’s core philosophy of Vasudhaiva Kutumbakam (the world is one family).
Narendra Modi made an epic adventure in his lifetime with Bear Grylls. He led by example with courage and inspired everyone across in the world especially Indians and millennials to care for the environment and ensure ecology to pass on to their next generations. To conclude, let us emphasize ecology and enhance tourism.